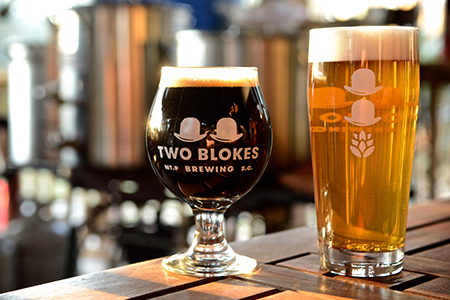 Keeping local brews on tap here at Charleston Beer Works is what we do! We have a passion for our community and we like spreading the local love with Charleston breweries. This month we’re featuring Two Blokes Brewing, located in Mount Pleasant! All February long, we’ll be serving up pairing recommendations with our menu items along with their craft beers.

Our February featured brewery opened their doors on in 2016 off of Long Point Road. “Two Blokes Brewing was founded by Sean Geddis and Matty Symons in 2016. The two friends met while working at Blackbaud, and found they shared a love of craft beer. The business is now entirely owned by head brewer Matty Symons. Sean his wife Brittany have moved on to other pursuits.”

“Matty is an accomplished home brewer and craft beer enthusiast with 20 years of experience in brewing craft beer. He studied brewing technology and methodology at Siebel Institute of Technology, America’s oldest brewing school.

Matty grew up in Melbourne, Australia and studied business and economics at La Trobe University and applied science at the Royal Melbourne Institute of Technology. After a number of years running a successful photography business in Melbourne and London, England, he moved to the United States. He relocated from New England to Charleston in 2007 and worked at Blackbaud for 9 years.”

His wife Evelyn Kofler is the Co-Founder and is in charge of Marketing and Communications over at Two Blokes Brewing and, “loves educating others about craft beer, especially women who may not consider themselves beer drinkers.”

We are honored to feature their beer selection at Charleston Beer Works in February as part of our local brewery showcase!

Come try any of their local drafts for $6.50 all day long, and $4 during Happy Hour from 4-7pm. Come see us at Charleston Beer Works!